A dainty teacup, hand-knitted shawl, a floral fragrance, or a quaint clutch purse. We all have distinct memories of a signature item that instantly reminds us of our grandmothers.

For us – my paternal family – it is without a doubt, her Mushaf. *

Recently, my 92-year-old grandmother passed away peacefully on the eve of Jumu’ah.  Separated from family by time and space, all I can think about and all that comforts me right now, is the immense love & devotion she had for the Revealed Words.

If I close my eyes, I can picture her holding her hand-sewn covered Mushaf, her constant companion, as she whispers into its well-thumbed pages…

When my grandfather passed away a decade ago, I observed how she found solace in devoting her iddah*, with such graceful patience, to its recitation. Not a day passed, but she would be reciting from its pages for hours on end, stopping only to pray or have her afternoon tea. She would sometimes tell me that her eyes were now tired, but that her heart was so happy and at peace. Her face literally glowed.

As a Tahfeedhul Quran* teacher, I would marvel at her devotion and tell my young students about her routines. Four months later, upon the completion of her Iddah, she spent some time with my family at our home.

During this time, she would change her afternoon rest hour so that she could be awake to receive the groups of students coming home to memorize Quran. She would position her chair so that she had perfect view of all the students, greeting them individually and taking the time to learn their names and ask after their family’s well-being.

And then she’d sit down, simply take it all in: listening to the measured cadence of their voices, the turning of pages; watching their young faces, etched in concentration as they reviewed their lessons.

She would often marvel at this human miracle; the phenomenon of millions of believers committing to memory thousands of verses and being able to retain it for a lifetime and beyond. She would ask questions: eager to understand the science and art behind this momentous task. 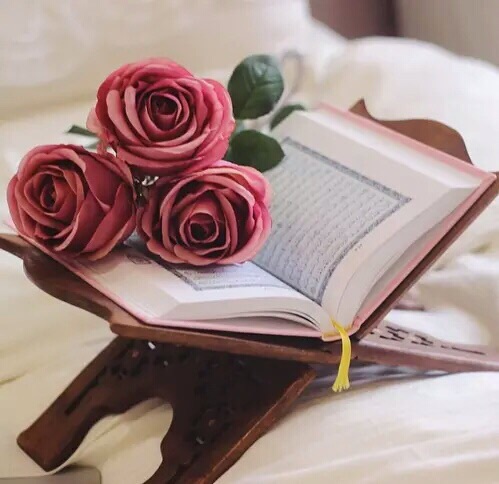 I once asked her what she would change, if she could go back in time. Her answer reflected her passion: “I’d memorize the Quran”, she said, without giving the question a second thought.

With children living in different parts of the world, she was both an expatriate and a seasoned traveler: London, Brisbane, Singapore, Joburg, Durban. And always with her companion, her well-loved Mushaf, reading for hours at a time, every single day, weathering each season of life. I would watch her unpack her suitcase, stow away her toiletries and medication, and seek out a shelf or drawer for her Mushaf. Ah! now, she felt at home and settled in. This Quran connection transcended jet lag, family events, and bouts of illness: this was a genuine love and respect for the Quran, a gentle nurturing that spanned decades.

In recent years, that Mushaf was accompanied by a new spectacle’s prescription and more recently, as her eyesight began deteriorating, a magnifying glass.

It was an awe-inspiring sight: a tiny figure sitting on the edge of her bed, leaning over the pages with a magnifying glass, morning and night. She recited fluently, turning the pages at the pace of a seasoned Haafidh*, aware of the flow of verses and the words to follow. She knew the pattern and rhythm of chapters, had certain portions which resonated with her more than others, and I would often observe her reciting from memory, ahead of my own review! So immersed was she in her recitation, that one could stand and watch her recite for a good half hour, and she would be oblivious to all else around her!

“What is there left for me in this world? We gave our children a good education and life, I’ve travelled the world…what more is there for me in the world? At least I have my Quran, that’s all I need.”

And when she was left with only partial vision, she began praying: “Oh Allah! Please don’t take away this eyesight; I am using it only to read your Quran. Without Quran, what worth is there of this eyesight?”

Her main fear was that if she were to lose her eyesight completely, she would not be able to read the Quran. That, I know, would have devastated her. She lived for this connection. She was, quite simply, attached to the Quran. Hers was not a seasonal attachment, or when time, health, or circumstances permitted: it was daily, during all of her free time, in every season of life. Unconditional love for Him and His Words.

This Quran, this true companion, spoke the language of her heart. And it was one full of hope, peace, mercy, and faith. It spoke to her grieving heart as a widow, and it spoke to her as she sought to live gracefully until the end of her life, with a heart full of contentment and yearning to meet her Lord Most High.

Years back, I had spoken to one of her brothers about our family tree: It was one that he was able to trace back to the Arabian Peninsula, and a tribe renowned for its Quran literacy: it brought her great honour to walk in the footsteps of her forefathers.

The way we die, is a mirror of the way we lived our lives: she left this world, her tasbeeh* clasped firmly in her hands and her index finger raised as we do for the Shahadah* in prayer.  Light upon Light.

Daughter of Islam, friend of the Quran…what a legacy she has left behind! She can never be remembered but that her name and memory will always, always be associated to The Noble Quran.

In the days since her passing, people around the world have been reading and praying for her: in the friendships she formed over the decades as an expatriate in different countries, to my many students who were inspired by her love for the Quran: Malaysia, Australia, Japan, Russia, Norway, Egypt, Ivory Coast, South Africa, to name but a few.

And if I close my eyes, I can picture her holding her hand-sewn covered Mushaf, her constant companion, as she whispers into its well-thumbed pages…

Verily, Allah raises some by His Book: and you, dear friend reading this tribute, are testimony to that.

Al Marhoomah Hawa Omar passed away peacefully on the eve of Jumu’ah, 1st Rabiul Awwal 1440 and was buried in London, United Kingdom. May she be raised amongst the people of Quran, those most beloved to Him, and gifted a home in Everlasting Paradise, reunited with her loved ones for eternity – ameen.

Penned by her granddaughter, Rayhaanah Omar

*Mushaf = written copy of the Quran

*Haafidh = a person who memorizes the Quran